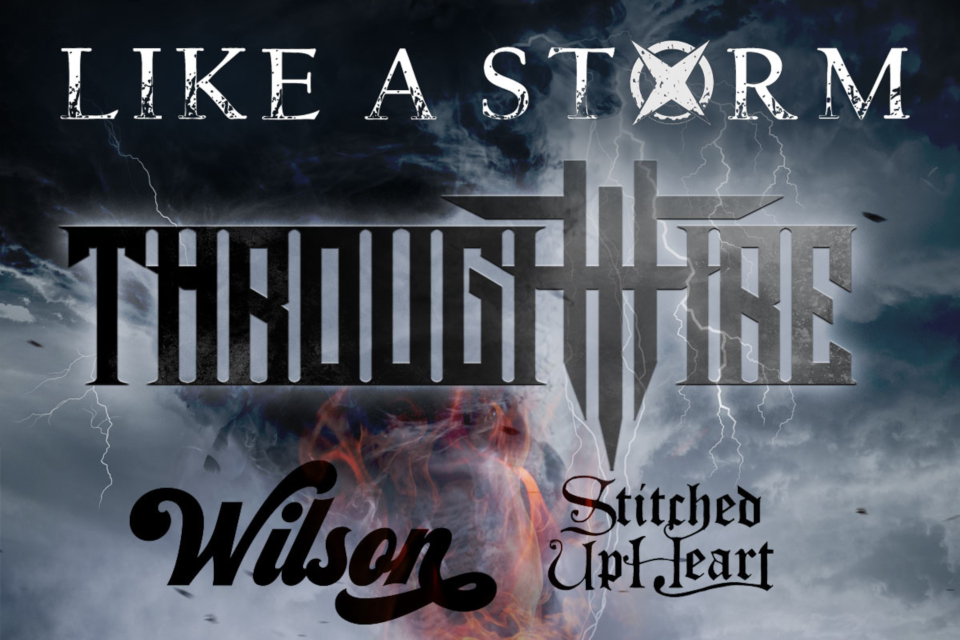 Like a Storm, Through Fire, Wilson & Stitched Up Heart

The deeper you dig, the more you unearth.

By turning inward without turning back, Like A Storm uncovered the eleven hypnotic, honest, and hard-hitting anthems that comprise their self-produced third full-length, Catacombs [SONY RED Music]. The New Zealand group shoveled raw emotion into an engine of airtight polyrhythmic riffage, cinematic electronics, and primal didgeridoo to fuel their biggest offering yet and claim a spot at the forefront of the modern rock pack.

“We had a day off on tour in Paris last year, so we went to check out the actual Catacombs,” recalls Kent. “We found out that because their cemeteries were so over-run, they buried six million people down there. So they pushed all of this disease and decay five stories down beneath them. It hit me that we’re all the same way…On the outside, we’re told to project a ‘happy’ and ‘normal’ exterior; but just below the surface, there’s a much darker truth that we hide.”

“The whole excursion hit us as a metaphor for burying aspects of ourselves we don’t want to face,” agrees Chris. “Just because you close the door on them, doesn’t mean they’ve gone away. In the Parisian Catacombs, there are certain places where the skulls have been arranged ornately into crosses and hearts and that seemed symbolic to me. If you’re willing to confront your demons and address what you hide from yourself, you can find beauty in the pain and peace in the struggle.”

“We’d been building towards this record for a long time both personally and musically.” Matt elaborates. “When we really took the reigns off, we ended up with the darkest and heaviest album we’ve ever made.”

A long, tireless grind brought the band to Catacombs. An ocean away from home, they

introduced themselves to the U.S in 2009. Through relentless touring, the band built a grassroots following, which led to their break-out single “Love The Way You Hate Me” receiving so much organic radio play that they broke into the U.S Active Rock Top 40 as an independent act.

By 2015, the smash single skyrocketed to #1 on SiriusXM Octane, clinching the top spot for five weeks and making the band the highest-charting New Zealand rock act in U.S. radio history. “Love The Way You Hate Me” eventually topped 7 million YouTube/VEVO views and 6 million Spotify streams, and steamrolled a path for the release of sophomore epic Awaken The Fire. Their cover of Coolio’s “Gangster’s Paradise” eclipsed 3 million on Spotify as “Become

The Enemy” and “Wish You Hell” both leapt past the 1.5-million-mark. All said and done, the release earned Like A Storm four Active Rock hits.

Along the way, they played arenas and large venues with the likes of: Alter Bridge, Slash, Volbeat, Gojira, Ozzy Osbourne, Godsmack, Three Days Grace, Sevendust and more. They were also invited to play standout festivals the world over including: Rock on the Range, Shiprocked!, Download, Nova Rock, Graspop Metal Meeting and more. In addition to acclaim from Alternative Press, Kerrang!, and Revolver, Metal Hammer claimed, “Like A Storm are rewriting metal’s rulebook like never before.”

Throughout 2017, they took time away from the road to write, record, and produce Catacombs in Los Angeles, Toronto, and a Las Vegas studio that over-looked the Strip.

“We’d never recorded in Vegas before,” says Kent. “The place has an energy to it unlike anywhere else in the world.”

Like A Storm bash through the gates on Catacombs with the opener and first single “The Devil Inside.” The didgeridoo intertwines with a trance-like metal groove, as a melodic, haunting vocal resounds before climaxing with one of the group’s catchiest choruses to date.

“It sets the tone of the whole record,” says Chris. “This dark journey within yourself, which brings you face to face with your demons.”

Meanwhile, “These Are The Bridges You Burned Down” charges forward on a mosh pit-splitting death march. As Kent puts it, “When we were writing it, we knew this one would throw down live and tear up speakers.”

“The Bitterness” proves instantly irresistible, and “Solitary” – featuring Matt on lead vocals -interplays between a soaring melody and aggressive guitar-work.

“ ‘Solitary’ is about feeling isolated and the realization that you ultimately created this loneliness for yourself by pushing everyone else away,” states Matt.

Catacombs closes with the six-minute epic “Pure Evil”. After a building intro, the unapologetic album finale hinges on a battering ram of distortion, before slipping into an airy piano reprieve and ramping back up into a chaotic catharsis.

As Chris comments, “We wanted the dynamics to mirror the subject matter.”

Matt continues, “ ‘Pure Evil’ tackles the hypocrisy of political and religious power. These people in our world who are revered as leaders, heroes, even seen as being god-like… are so often exposed to be the worst of the worst.”

In the end, Like A Storm dig deep and make a lasting connection on Catacombs.

“Ultimately, we wanted to bring back the feeling we got when we grew up listening to rock and metal records,” concludes Kent. “That’s why we make music.”

Hard rock should exist outside of the system. It should break the mold. It should burn through expectations.

Through Fire most certainly does.

The Omaha, NE quartet—Justin McCain [lead guitar, songwriter], Grant Joshua Kendrick [lead vocals], Kyle LeBlanc [bass], and Grant Brooks [drums]—fuses hard-hitting riffs, electronic provocations, and contagious melodies. As a result, this impactful, immediate, and infectious fusion defies categorization and incites energy as boundless as the style itself. Additionally, the approach transformed the quartet into a phenomenon with chart-topping radio successes and over 20 million Spotify streams and 48 million YouTube views in under two years.

Now, the same fire fuels the band’s 2019 second full-length for Sumerian Records.
“There are no limitations to what we do”, says Justin. “From a songwriting standpoint, I wrote this album with no boundaries. I wanted great, timeless songs. I wasn’t going to settle for anything less.”

They set the stage to take such action on their 2016 full-length debut, Breathe. Not only did the breakout single “Stronger” clock millions of streams and spend 26 weeks on Billboard’s Rock Charts, it also spent five weeks at #1 on Octone’s popular Big Uns Countdown. Proclaimed “Breakout Artist of the Year,” Sirius Octane named “Stronger” among the Top 3 songs of the year, placing them in a league of their own next to none other than Metallica and Highly Suspect. On iTunes, Stronger quickly went to #1 and outsold the bulk of bands in the Hard Rock and Heavy Metal genres. The single soundtracked various mixed martial arts matches for NBC Sports and the Stanley Cup Finals. It also served as the theme for WWE’s Backlash.

Reclaiming the top spot, “Breathe” also ascended straight to #1 on Big Uns Countdown. As the band crisscrossed the country on tours with Seether, Fozzy, Nonpoint, Sick Puppies, Black Stone
Cherry and performed at festivals such as Chicago Open Air, Louder Than Life, Sonic Boom, and Rock Fest, among many others, they amassed a fervent fan base which helped them continue
to sell an impressive amount of singles.

During 2018, Justin started architecting Through Fire’s next chapter. As the producer, Justin— along with his engineer Alex Gozza—spent every day and night in Omaha’s Make Believe Studios. In this place, they built the sonic framework for what would become the band’s highly anticipated sophomore album.

They introduce this era with the primal and powerful “All Animal.” Baring its claws and teeth, the tune tempers gnashing riffs with ominous electronics as Grant’s howl hits hard. “I was just describing what it felt like to snap,” Justin explains. “When Someone keeps pushing you to the limit, that’s when you become all animal. The human side shuts off. Everyone has a breaking point”.

“All Animal” is just one of many big anthemic songs on this album. Their story as trailblazers ultimately continues as they maintain a place at the forefront and carve their name in the hearts and minds of fans all around the world.

“We put everything into this album, and we can’t wait for the world to hear it,” he leaves off. I pushed myself like never before as a songwriter and producer. Grant’s vocals are better than ever. He’s a captivating, dominant force on stage. Our drummer Brooks is like a combination of Tommy Lee and Morgan Rose—the kid is electrifying. Our bass player Kyle is one of the best all around musicians I know. I feel so blessed and fortunate to be surrounded by such talented people. Big thanks to my engineer Alex Gozza, our mix and mastering wizard Kyle Odell, the amazing staff at Make Believe Studios, our brilliant team at Sumerian Records, FM Music Management, AGI, all of our friends in radio, press, every promoter, venue and of course all our fans who make this possible!”